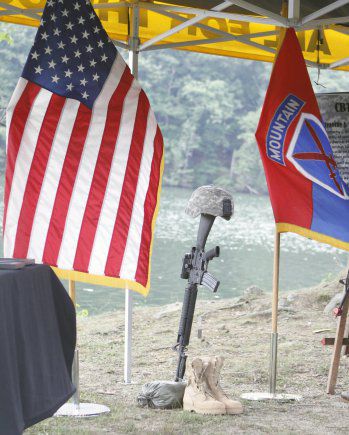 West Point “Point of View” A

The following article discusses the end of Basic Training (“Beast Barracks”) for incoming West Point Plebes in August 2012. Brian was privileged to give the address at the end of the difficult Timothy Steele Challenge, named in honor of one of Brian’s former students who had been killed leading his troops in battle in Afghanistan the previous August.

WEST POINT, N.Y. (Aug. 16, 2012) — The Steele Challenge Awards Ceremony was conducted Aug. 11 at the Camp Buckner parade field to recognize the top company and squad in the capstone event for Cadet Basic Training. It also honored the life and legacy of 1st Lt. Timothy Steele, Class of 2009, whose name was chosen for both the CBT Task Force and the challenge.

Attending the ceremony were family, friends, colleagues and instructors of 1st Lt. Timothy Steele, including his parents Mary Ellen and John Steele,

his sister Julie Maxwell, brother-in-law David Maxwell and nieces and nephews joining the official party on the stage at Camp Buckner.

During the ceremony, Class of 2013 Cadet Captain Cory Trainor, the regimental executive officer, presented the family with a memory book on behalf of Task Force Steele, containing photos from the Steele Challenge and personal letters from Commandant of the Corps of Cadets Brig. Gen. Theodore Martin, the regimental command team and company commanders expressing how 1st Lt. Steele’s legacy shaped this summer’s leadership experience. The book also includes all the signatures of cadets comprising Task Force Steele.

“We hope it can serve as a reminder of how your son continues to impact the Long Gray Line and the future officers of our Army,” Trainor said.

The ceremony was narrated by Cadet Nikki Hernandez, regimental S-4 (Supply) with the script written by Class of 2013 Cadet Erik Moore, the regimental S-1 (Personnel).

“His philosophy to lead by actions, not words, has inspired the Class of 2016 to test their internal limits and push themselves further than they’ve ever gone before,” Hernandez said. “With Lt. Steele as their inspiration, the Class of 2016 is ready to continue their journey toward officership.”

During the Steele Challenge, each squad visited a memorial for the fallen grdaute at the conclusion of the event Aug. 9-10. There, an audio message from Lt. Col. Brian De Toy, director of the Defense and Strategic Studies Program at West Point, described the Class of 2009 graduate who had once written:

“My favorite time of the day is at 2330 when Taps plays over the speaker in the hallway. For those 20 seconds or so all I think about are the men who have fallen fighting for this country. One day it will play at my funeral and when it does, I pray that I am deserving enough of that honor and the respect that it shows.”

De Toy was also present at the awards ceremony and addressed the CBT regiment again. As the cadets were preparing to gather their gear and ruck back to West Point, De Toy reminded them of a group of lieutenants who were presently carrying their own 40-pound rucks from the West Point Cemetery through a 65-mile route leading to the new World Trade Center site in honor of Steele.

“Remember this when you do your March Back on Monday (Aug. 13); you’ve been engaged the past two days in the Tim Steele Challenge and I hope it pushed you physically and emotionally, because Tim would have wanted it that way,” De Toy said. “One of the things I said at his funeral one year ago is that Tim was as tough as tough can be, but also soft as velvet. That was all part of Tim’s leadership style: tough and demanding, but very, very caring for his men.”

De Toy said Steele had struggled academically at West Point but never quitted when it would have been the easy choice.

“He persevered, and you will too,” De Toy said.

In one of Steele’s papers in De Toy’s capstone class, he wrote how he had realized his leadership development didn’t occur overnight, but was gradually instilled in him from the officers and noncommissioned officers he learned from at West Point.

“If I had to answer why I continue to grow, it is for my future Soldiers, that they are set up for success,” De Toy read from the essay. “It is also because I truly care for this organization and the people in it. I want to better myself so that I am worthy to be in it like all my role models, and in turn, when I am in charge myself, I will try to inspire the same desire in my subordinates.”

Steele was fit, athletic and smart, De Toy said, even if his grades didn’t always reflect his intellect.

“He was determined, and the light really turned on for him in his last two years here,” De Toy said. “He was a sponge. He made himself a reader and a lifelong learner. He was well-rounded and prepared himself as a leader.”

The Best Company Award streamer was presented to Company D for recording the best overall score and was the best performing company at the hand grenade site and marksmanship sites. Additionally, this company had some of the squads with the fastest movement times between sites.

“Not only did the Steele Challenge test the new cadets’ proficiency in Soldier skills acquired during Cadet Basic Training but it also built a sense of camaraderie and teamwork within their units,” Hernandez said.

Class of 2013 Cadet Captain Thomas Ott, the CBT regimental commander, congratulated the new cadets and Task Force Steele for their efforts throughout summer training which was reflected in the Steele Challenge.

“First Lt. Steele is a perfect example of the power and influence one individual can have on those he leads. Although he is no longer with us today, his spirit and character continue to influence his brothers- and sisters-in-arms,” Ott said. “His zeal and enthusiasm to be a cadet and Army officer have inspired each and every one of you to successfully complete one of many obstacles and challenges you will face as future leaders in our profession. I ask that you continue to carry this enthusiasm and desire to succeed with you the rest of your lives. Continue to embody the spirit of a Soldier that was so effectively displayed in Lt. Steele’s actions. Always remember the impact Lt. Steele had on the beginning stages of your character development. I could not be more proud of the efforts I witnessed from each and every person in front of me today throughout the duration of the Steele Challenge. Remember, actions not words, and you will always fight through all odds.”

Continuing on that reflection of a job well done, the regimental command sergeant major, Class of 2013 Cadet Orlando Sonza applauded the members of Task Force Steele for dedicating themselves to the challenge.