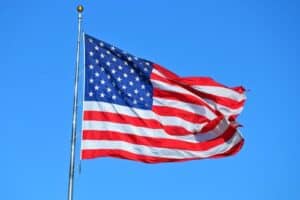 She’s been through the fire before,And I believe she can take a whole lot more.

At 5:00 p.m. on September 11th, 2001, three New York City firefighters raised the Stars and Stripes above the wreckage of the World Trade Center in lower Manhattan. In a photo that went ‘round the world in moments, the American people had recaptured their spirit and their grit and determination. The flag was whisked away later that night and replaced with an even larger one. However, the image, much like the iconic one of the Marines at Iwo Jima, had served its greater purpose. Today, the original flag is on display at the National September 11th Memorial in NYC. “I can hear you! I can hear you!

The rest of the world hears you. And the people who knocked these buildings down will hear all of us soon,” said President George Bush at the WTC site on September 14, just days afterwards, as American flags waved in resilience.

Flags mean something. Something different, perhaps, to each of us. For me, nothing quite captures the emotions I feel when looking upon our flag as the first stanza of our national anthem is sung. Among many other surging images and thoughts, I always think of that September 14th morning in 1814, when Francis Scott Key saw the American flag still waving above the ramparts of Fort McHenry in Baltimore harbor. Combined with the defeat of the invading army the previous day, the defense of the harbor wrecked British plans and they withdrew from the capital region. Flying from the Fort McHenry battlements that morning was a special pennant. The garrison commander, Major George Armistead commissioned it, saying “I wish for a flag so large that the British will have no difficulty seeing it from a great distance.” Measuring 30 feet by 42 feet, it was the largest battle flag the US has ever flown. Today, it resides on display in the Smithsonian in Washington, D.C. Key’s poem became our national anthem in 1931.

Congress passed the Flag Resolution on June 14, 1777, two years to the day after creating the US Army. Betsy Ross of Philadelphia, and others, crafted the early flags for use with George Washington’s Continental Army. It has led our Soldiers into battle ever since and does so today. Congress did not state the full particulars of the flag design, but “Resolved, That the flag of the thirteen United States be thirteen stripes, alternate red and white; that the union be thirteen stars, white in a blue field, representing a new constellation.” The colors are important – Red representing hardiness and valor, White signifying purity and innocence, while Blue maintained vigilance, perseverance and justice. And reflect a moment on those final words – “a new constellation.” The experiment that was the United States was something new, original, filled with hope and promise. There were many old and famous countries, led by kings. Their flags, filled with lions and eagles and stags, were of the old constellation. America represented a young vigorous opportunity. The Declaration of Independence, of which our flag is a tangible reminder, is an aspirational document. We have not yet achieved all it set out. But we can strive to perfect it –to make it real. It is a dream and a challenge to live up to the ideals we say we stand for. And, for us today, it is an obligation to be met, and met willingly.

In 1916, during World War I, President Woodrow Wilson proclaimed an annual national Flag Day. Thirty-three years later, after World War II, President Harry Truman signed a resolution making the holiday June 14th, the same day as the original congressional resolution. Images of the American flag are indelibly linked to our history. From Teddy Roosevelt and his Rough Riders and Buffalo Soldiers atop San Juan and Kettle Hills to the Marine flag-raising atop Mount Suribachi in the midst of the early bitter fighting on Iwo Jima. The latter is memorialized today in the monument in Arlington, Virginia.

In Vietnam’s Hanoi Hilton prison camp, a pilot, Mike Christian of Selma, Alabama, was held for six years. The prison uniform was blue, and Mike crafted a bamboo needle, collected some red and white cloth, and sewed an American Flag inside his shirt. Each afternoon, the POWs would hang Mike’s shirt on the wall and recite the Pledge of Allegiance.

For some, repeating the Pledge may not be the most important part (or even any part) of our day. However, for those American prisoners it was incredibly meaningful. One day, the Vietnamese searched Mike’s cell, found his flag and took it, and then beat him mercilessly for hours for “the benefit of the other Americans.” Mike was thrown back inside his stark cell and was badly hurt. Late that night, when all had fallen asleep, Mike woke and sat under a dim bulb with pieces of white, red and blue cloth. With his bamboo needle, and with his eyes nearly swollen shut from the beating, he fashioned another flag. Mike Christian knew how important it was for his fellow prisoners to be able to pledge allegiance to our flag and to our country. In times of incredible stress, something to hold on to can be the thing that saves your life.

On this Flag Day, let us remember Old Glory as the symbol of a people and a country that does not accept defeat, that struggles ever forward toward achieving that more perfect union. We owe this much. To our forebears, especially those who gave their lives that our nation might live. Let the American Flag be our companion on this journey, inspiring the collective us to efforts greater than our individual selves.

Please note that this item is approved as is for use with clients and prospects. (For Public Distribution)