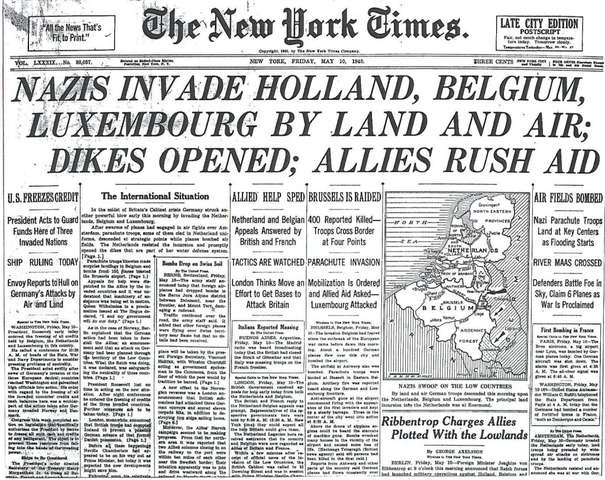 “Hitler has chosen a moment when, perhaps, it seemed to him that this country was entangled in the throes of a political crisis and he might find it divided against itself. If he has counted upon our internal divisions to help him, he has miscalculated the mind of this people.”

Later in the day, on this date eight decades ago, Chamberlain resigned and King George VI asked Winston Churchill to form a government. Churchill had been serving as head of the Navy in Chamberlain’s administration. Churchill reached out to Clement Attlee, head of the Labour Party and, together, they formed a unified war government for the duration of the conflict.

80 years ago yesterday, Nazi Germany invaded the Low Countries, neutral countries all, and the west front war with France and Britain was on. The Germans had faced the impregnable Maginot Line on the frontier with France. Knowing they could not breach it, they, instead, invaded the neutrals to go around it.

The British Expeditionary Force was soon cut-off and driven to the Channel ports in less than two weeks.

The conflict would now go on, unabated, for five years.